Mistress Nikky had asked this bitch to keep her distance. She was trying to seduce mistress Nikky's boyfriend and she warned her about it. She kept persisting and Nikky had to do something. She lured him to her house and made her think it was him who was calling her. When she went, she found mistress Nikky who tortured her by facesitting on her and wiggling her ass on her face while wearing jeans.

Mistress Jolie could not believe what her slave had been accused of. She chose to side with him in public but when they reached home, she turned on him and she punished him for what he had done. She facesat on him as punishment and bounced on his body and on his face while she was drinking some wine. She tortured him till she felt that he had learned his lesson.

Mistress Rosella and her friends wanted to invest their money on a project they did not understand much about. But the guy who would have explained it to them was a mean guy and he did not want them to benefit from it. So they forced him to tell them what they wanted to know by trampling him with their bare asses and forcing him to lick them and to smell their farts.

Mistress Gaia tortured her slave for being slow. She did not want to condone his behavior so she forced him to change it. She did this by making him lick her ass as she facesat on him. He also licked her feet and she humiliated him and degraded him. She laughed at how he looked as he licked her sweaty ass. She could not see his face as he licked her ass.

This sexy mistress wanted to make sure her slave did not associate with the wrong company. So she forced him to lick her ass as punishment. She also tied some plastic on his face and taught him a lesson he will never forget. She enjoyed the punished as he licked her ass and pussy but he was in pain and he was degraded by all that was happening to him. 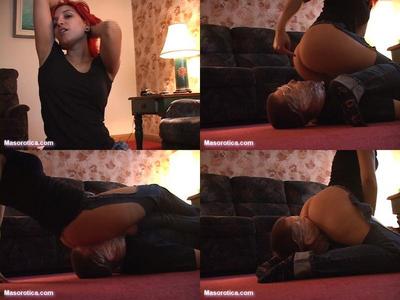 Mistress facesits on slave to humiliate him and have fun

This mistress chose facesitting fetish because she also wanted to have fun at her slave's expense. She wanted to enjoy herself by rubbing her clit on his face while he licked her ass and her pussy. She did it vigorously till she reached orgasm then she concentrated on humiliating him. She made sure he had licked her ass and he was nearly choking before she felt it was enough punishment for him.

This mistress found out about facesitting fetish and she was dying to try it. She did not have a slave so she searched for one on the internet and when she found one, she took time to humiliate him using her newly acquired fetish. She forced him to lick her ass and to smell it too. To make it worse for him, she made him smell her farts and it was cruel for him.

Mistress facesits on boyfriend to teach him a lesson

This mistress was not happy with her boyfriend. He had been entertaining other girls and although he had not slept with them yet, she knew that was where it was headed if he did not stop. She had to make him stop so she facesat on him as punishment. She told him any time he entertained other girls, she would trample him and crush his face with her ass. He learned to stop entertaining other girls so as not to get in trouble.

Mistress Natasha was all alone at home. Her boyfriend had left her to go and drink with the boys and when he came home, he had the temerity to ask her where the food was. She was pissed and she humiliated him by facesitting on him. She made him lick and smell her ass and told him to go to the kitchen and fix himself a meal if he was hungry.